Bloodfeast the Extreme-inator was an allosaurus in the stable of the Empire of Blood, used for gladiatorial combat in the arena, as well as a mounted unit in the army, before he was Polymorphed into a lizard by Miron Shewdanker. He was befriended by Belkar Bitterleaf and has traveled with the Order ever since.

Bloodfeast first appeared in the gladiator arena outside Bleedingham. He was used as a shock entry into the games, when the combat was not exciting enough.[1] Tarquin attempted to strictly control his appearance, so as not to over-saturate the surprise value of the giant dinosaur.

When Belkar saw Gannji and Enor, two friends who were forced to fight to the death, he was moved to pity (a new experience for Belkar), relating their experience to a hypothetical battle between himself and Mr. Scruffy, his animal companion. Belkar enlisted the help of Ian Starshine, and let the allosaurus out of its cage.[2] The beast rampaged into the arena just in time to save Gannji and Enor from certain death at the hands of Tarquin's firing squad. Bloodfeast was indiscriminate in his violence, hitting Enor as well, though this damaged his wing restraints and allowed the pair to escape the arena. Tarquin was annoyed at the dinosaur being used a second time in the games, and Bloodfeast was eventually corralled.

Bloodfeast appeared again in the desert of Windy Canyon, near the former site of Girard's Gate. At that time he was mounted by a soldier of the army of the Empire of Blood. There was at least one other mounted allosaur in the troop, as well as many other smaller mounted dinosaurs.

Tarquin ordered the army to kill Roy, Belkar, and "Durkon". Eventually, Vaarsuvius returned from the Abyss and joined the fray, as did Haley and Elan, who had been with Tarquin. With the Order surrounded, yet the army held at bay by a Wall of Fire spell, Belkar recognized Bloodfeast from their earlier encounter in the arena. He spoke to the beast, who apparently remembered Belkar and the feast of humans he had after he was let free. Belkar mounted Bloodfeast and proceeded to rampage through the army. Those in the party who could not fly mounted on Bloodfeast and escaped the army to the open desert.

After some pursuit by elements of the Vector Legion mounted on a triceratops, Bloodfeast was turned into a lizard by Miron Shewdanker by means of a Baleful Polymorph spell. It was at this point that Haley and the others learned that Belkar had named the beast "Bloodfeast the Extreme-inator".[3] 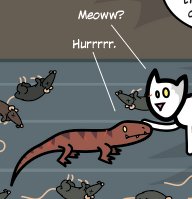 After their battle with the Legion, when they were escaping the the Mechane, Belkar insisted that Bloodfeast be saved from Tarquin so that he didn't "roast the little guy on a spit for helping us."[4]

Still a small lizard, Bloodfeast remained on the Mechane during the events of the Godsmoot. During this time, the vampire Gontor Hammerfell snuck aboard the ship and into Vaarsuvius' cabin, where Bloodfeast and the other animals were staying. Bloodfeast helped Blackwing and Mr. Scruffy battle the Mischief of Hel (swarm of rats) which Gontor called to dispatch them, considering the animals beneath him. Gontor escaped with V's teleportation orb, but Blackwing saved the animals with a scroll mishap which triggered an explosion and killed the rats.

Bloodfeast was last seen sleeping in Belkar's bag of holding.

Retrieved from "https://oots.fandom.com/wiki/Bloodfeast_the_Extreme-inator?oldid=36920"
Community content is available under CC-BY-SA unless otherwise noted.