Crystal was an enforcer in the Greysky City Thieves' Guild, and Haley Starshine's personal nemesis. Meeting at 19 years of age, they kicked off their relationship with an immediate hatred for each other. When Haley returned to Greysky City, Crystal tried to kill her, but failed, and was killed by Haley instead. She was then brought back as a flesh golem, and finally destroyed by Haley.

Crystal met Haley upon joining the Guild when they were both nineteen;[2] however Crystal's first move was to "compliment" Haley's lime-green Boots of Speed, to which Haley responded in kind about Crystal's hair. Their mutual antagonism led to a longstanding rivalry, which had the unfortunate consequence of raising Crystal's level with Haley's.[4] It was Crystal who re-blinded Old Blind Pete on his way to Anywhere after a Cleric of Loki regenerated his eyes, and Haley mentioned her as having once "head-but[ted] an elderly gnome woman into a coma".

When Haley was forced to re-enter Greysky City and attack Hieronymus Grubwiggler, a necromancer under Guild protection, Crystal was one of the Guild members who ambushed her, Celia and Belkar. Once Haley was incapacitated, she cut off much of her hair as revenge for the past insult, taking her token ponytail as a trophy. Haley was saved from a coup de grace by Belkar, newly emerged from his sickness. Belkar reduced Crystal to zero hit points, but left her alive. Celia eventually bartered with Bozzok for a truce and help retrieving Roy's body (now a bone golem) from the necromancer, which Crystal took part in. Despite this respite, Haley killed her and stole her knife before leaving.

Crystal was later reanimated, as an exotic flesh golem[5], the result of Bozzok spending the money Haley gave him to raise the thieves killed in their conflict to rebuild her, and ambushed Haley, Elan, and Bandana in Tinkertown. As a flesh golem she retained her memories and skills. She attempted at first to use this opportunity to take revenge, blaming Haley for her death and for her reanimation as a flesh golem, which caused her constant pain. Haley managed to turn Crystal against Bozzok by pointing out that Bozzok was the one responsible for the worst of Crystal's suffering: all Haley did was kill her, while Bozzok was the one to reanimate her in an unpleasant state. He did this despite the agony Crystal then suffered and the fact that raising her properly would actually have been cheaper. Bozzok attempted to order her to go back to killing Haley, but only further angered Crystal by confirming Haley's assertions that he did not care about Crystal, to which she responded by beating him to death.

After killing Bozzok, Haley asked Crystal what she would now do, to which she replied that she would stay in Tinkertown, and kill gnomes, because "Hurts less when I'm hurting someone else". Because of this, Haley lead Crystal to the Tinkertown Municipal Waste Disposal Facility, and caused her to fall into the lava below, thus killing her once and for all. Haley stated that she was going to kill Crystal because she was a "sadistic, unrepentant murderer who's a danger to, like, everyone".

Haley referred to Crystal as being "as dumb as a used tanglefoot bag". This dimwittedness is often proven, such as when she concluded that Haley's refusal to eat pickles translated to a physical vulnerability to them. Bozzok also claimed she often forgot what he ordered her to do, or even got bored with her orders and decided to get high instead. Crystal was a violent and sociopathic monster. She found joy in the pain of others, and let all her frustration out on them. 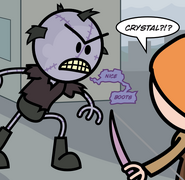 Retrieved from "https://oots.fandom.com/wiki/Crystal?oldid=38536"
Community content is available under CC-BY-SA unless otherwise noted.