Start a Wiki
[Source]
The Dark One was a violet-skinned Goblin, a trait which marked him for greatness amongst his kind.

He was famous for uniting the Goblinoid races, and conducted a brilliant and savage campaign against the northern countries. Having them at his mercy, he goes to their leadership to talk, for all he wants is all races to be equal. In particular he seeks better living conditions for Goblinoids, who he describes as having always gotten the worst lands on the edges of the other races territories.

In the middle of the talks, however, he is killed by an Assassin[1] hired by the rulers of the countries, who used the talks as a means to seperate the Dark One from his horde and eliminate him. In revenge, his armies spent the following year killing one million humans. Such is their devotion to the Dark One that he ascends as a God, like the Elven Gods before him. He is allowed dominion over Goblinoid affairs.

In the divine realm, the Dark One learns of the other gods' cruel joke, that being that the whole of Goblin-kind was created for the sole purpose of providing Clerics with low-level threats to aid in their level progression. Enraged, he confronts them, but gets nowhere. Some of the Good-aligned Gods want to destroy him, but he finds friends amongst the Evil-aligned Gods, particularly Tiamat, Loki and Rat. The Evil Gods point out that they played along when the Elven Gods arrived so the Good Gods should give the Dark One a chance.

A Cleric of the Dark One stumbles across a rift while being chased by Paladins and is killed by an entity created as a by-product of the first world created by the Gods, called the Snarl. The Dark One is alerted to the presence of the Snarl and, after conversing with his Evil God allies, comes up with a plot to harness the Snarl as a revenge tool to use to barter a better situation for the Goblinoid people.

He created a powerful Artifact Cloak called the Crimson Mantle, entrusting it to his high priest. This priest raised an army to seize the Snarl's rift in the Elven Lands but it was thwarted by the Order of the Scribble. The Crimson Mantle is passed down through the Dark One's clergy, enlightening each bearer with the Dark One's plan.

When Lirian and Dorukan created the Gates, he realized that a ritual with a High Level Divine caster and High Level Arcane caster (the same as those who forged the gates), could grant him control over them and subsequently release the Snarl on any plane he saw fit. That meant that he could blackmail the other pantheons in order to improve the lot of Goblinoids. He bequeaths this plan to the Bearer of the Crimson Mantle, and all who succeed him.

After the death of the last high priest and most of the remaining followers of the Dark One, Redcloak assumed the Crimson Mantle and planned to use the Human Sorcerer Xykon to fullfill the Arcane portion of the Dark One's plan. He has convinced Xykon that it is Xykon who will control the Snarl at the end of the ritual and thus enlist his aid. When Xykon was ressurected as a Lich however he grew too powerful and Redcloak's ability to influence him has decreased significantly.

Blood Runs in the Family Edit

The Dark One's plan was nearly revealed to Xykon by Tsukiko but Redcloak intervened. Using his superior Divine casting he took command of Tsukiko's own wights, had them devour her and then destroyed the only translated copy of the rituals end, presumably ensuring Xykon's continued ignorance. 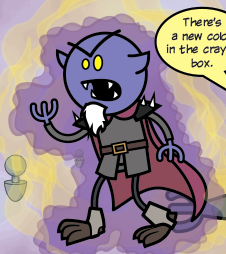 At present the Dark One himself has not played a major role, presumably operating through his followers.

He has recently been mentioned by Thor, who wishes to form an alliance with him. Thor explains that each of the four Pantheons possesses a unique essence, which can be seen in the color of their aura, and that the more different essences are involved in a creation, the more powerful it is. The world is unraveling because it was only created by three Pantheons, whereas the Snarl was created by four. Because the Snarl killed the fourth and then destroyed everything the four had created together, it is now the only thing with four different types of essence in its makeup. However, the Dark One became a god without the aid of the three extant pantheons, which is wholly unprecedented and means that his essence does not match any previously documented essence.

Thor seeks to bring the Dark One into negotiations, and include his essence into the new Gates. With a fourth essence behind them, the Snarl will not be able to break them, and will have to work around them. Thor believes that if the gods continue making these upgraded Gates wherever and whenever new tears form, they might be able to keep the current world extant for millions or billions of years, even though no previous world has existed for more than a few thousand.

The Clerics of the Dark One seem to be only Goblins and Hobgoblins. They are apparently classified in rank and assigned color-coded cloaks, of which the Crimson Mantle is the most powerful.

Also known to exist are White Cloaks (Start of Darkness, 34 years ago) and Gray Cloaks.

This may be a reflection of Goblinoid society more than a convention of priesthood proper, for Hobgoblin Generals have been seen wearing Purple Cloaks, while the Hobgoblin Supreme Leader wears a Green Cloak.

Brown Cloaks and Light Blue Cloaks have also been observed, but their meaning is not very clear.

Dark One on the Order of the Stick's poster.

Redcloak's painting of the Dark One.
Add a photo to this gallery
Retrieved from "https://oots.fandom.com/wiki/Dark_One?oldid=36842"
Community content is available under CC-BY-SA unless otherwise noted.