Brought out by the Monster In The Darkness by leaving a bowl of popcorn out in the living room as opposed to taking it back to the kitchen like he was supposed to, these shoe-sized red cockroaches follow Redcloak and Xykon around.[2] They enjoy watching the carnage and destruction that Xykon brings with him, though Xykon and Redcloak usually ignore their existence (beyond Redcloak's annoyance and setting of Roach Motels, and Xykon betting with one).[3][4] They often make sarcastic comments at the seemingly absurd actions of Xykon and Redcloak a la Mystery Science Theater 3000, or perhaps as a nod to the insect banter in the margins of Cricket Magazine.

Start of Darkness shows that the Cockroaches traveled from the Spice Rack of the Damned in the Abyss to an evil-themed restaurant that Xykon, Redcloak and Right-Eye formerly frequented via a portal. They then chose to follow Xykon because he often visited the restaurant and thus eventually picked up the stench.

In one strip they used Vaarsuvius as a viewing stand during the first confrontation with Xykon after V was paralyzed, breathing fire on undead that were "blocking their view". After Xykon's head was punched off by Roy, a roach wore the crown and pretended to be a king, which the crown was picked off from the roach shortly after.

No Cure for the Paladin BluesEdit

At Xykon's Tower in the Southern Mountains, their good counterparts, the Angel Cockroaches, appeared.[5] In another strip, Miko used one of the roaches to escape a (moderately escapable) forcecage by forcing the roach to breathe fire and light a Molotov cocktail made from her cloak and a bottle of dwarven brandy.[6]

Another cockroach was seen riding on a raccoon as Redcloak gave the order for a final charge on the breach in Azure City's walls from atop a fiendish mammoth he summoned.[7] One was used by Belkar to cook stew, who later got revenge by giving the Monster in the Darkness advice on how to beat Belkar and Haley.

A pair of Demon Cockroaches implied at one point that the grand plot of the comics involves at least nine distinct factions, at least some of which were not yet known about at that point.[8]

One also attempted to try and do damage control when O-Chul began convincing the Monster In The Dark to think for himself and he realized Xykon and Recloak had been only using him. After seemingly failing at this, the roach was "killed" (or returned to the Abyss) by O-Chul when it tried to warn Xykon and Redcloak of his escape.[9]

Blood Runs in the FamilyEdit

Two roaches survive the destruction of Girard's Gate by riding out the blast in a cooler, a gag referring to Indiana Jones and the Kingdom of the Crystal Skull.

Another roach was killed by Jirix after Xykon and Redcloak left Gobbotopia to find Girard's Gate. It is unknown why Jirix did this, possibly just because it was annoying him.

The roaches remain with Team Evil at Kraagor's Tomb, making wisecracks about Redcloak's buff spells prior to entering the tombs. 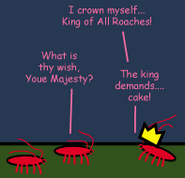 An Angel Cockroach.
Add a photo to this gallery

Retrieved from "https://oots.fandom.com/wiki/Demon_Cockroaches?oldid=38577"
Community content is available under CC-BY-SA unless otherwise noted.