Elan's mother was a Chaotic Good barmaid who married Tarquin and had two children, Elan and Nale.

Apparently, while she was still with Tarquin, he liquified every man in the tavern if one of them grabbed her butt again during her shift and turned them into fertilizer for her. She was very upset about this and complained about it.[1]

According to Tarquin, she insisted that they would separate. Tarquin (at least according to him) went to the court for visitation rights but she fought him with all legal measures.[2] She was described by Tarquin as being unwilling to compromise.[3] Eventually a compromise was reached to share the twins; she kept Elan and Tarquin kept Nale. She attempted to fulfill the absence of his father by wearing a fake mustache at father-son picnics.[2]

Tarquin sent a letter telling 15 year old Elan about the backstory but he guessed his mother threw it away.[2]

Elan's mother seems to be needlessly complicated. She is seen planning out a table-serving plan, as quoted above.[4] The same comic strongly implies that this is where Nale got his penchant for the needlessly complicated, as Elan pointed out in response to Nale's fighter/rogue/sorcerer multiclass with specialization in enchantment spells.[5]

When the Order was trapped in Girard Draketooth's phantasm dream, Elan dreamed of his mother remarrying Tarquin. In the ceremony Malack referred to her as "Elan's Mother", suggesting that as far as the Order is concerned that is actually her name.[6] Elan asks his illusory mother why she is getting back together with Tarquin, which she answers that she is doing it for him, to which Elan counters that she divorced to keep Tarquin away from him, in which she hesitantly agrees to. [7] 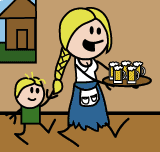 Elan's mother in the illusion.
Add a photo to this gallery

Retrieved from "https://oots.fandom.com/wiki/Elan%27s_mother?oldid=34181"
Community content is available under CC-BY-SA unless otherwise noted.