Girard's Gate is the snarl rift guarded by the illusionist Girard Draketooth of the Order of the Scribble in the Draketooth Pyramid, hidden in the Windy Canyon. Girard protected it by countless illusions, and with the aid of his direct descendants, the Draketooth Family.

After the Order of the Scribble broke up to defend their respective Gates, Girard headed to the Western Continent to guard his gate by building the Draketooth Pyramid to hide it, hiding it behind a endless series of cunning illusions, relying on deception to guard the gate.[1] Only trusting those closest to him, he had 2 sons and daughters[2] that would later go out from the safety of the pyramid to reproduce, and then abandoning their mates and taking their children in order to grow the Draketooth Family, guardians of the gate.

The Gate, hidden inside the depths of the pyramid, was protected with one last ruse: the Gate was put inside a lead-sheeted pillar that informed people that the Gate was not there.[3]

Soon Kim, leader of the Order but having a bad relationship with Girard, requested location of the Gate from Girard. Girard, having little faith in Soon, gave him false coordinates that led to somewhere in the middle of the desert.

During the time of Don't Split the Party, Order of the Stick member Vaarsuvius unleashes the spell Familicide on a Ancient Black Dragon, ending their entire bloodline, which included the Draketooth Family, as Girard hailed from a half black dragon father. The entire family was killed, leaving the Gate defenseless except for the remaining illusions and traps inside the pyramid.

During the quest for the Gates, the Order of the Stick visited the Oracle. Roy worded his question carefully, to keep the Oracle from being too ambiguous; however he ended up making it too precise, eliminating Xykon's actual next target (Soon's Gate and the Azure City) from consideration and thus the Order was mistakenly led to believe that Girard's Gate was Xykon's current destination, which actually would be his next.

Later, Lord Shojo intended to resurrect a dead Wizard to teleport the Order to Girard's Gate, however, he was killed by Miko Miyazaki before it and then the Battle of Azure City begun.

They were rewarded by a lead from Elan's father Tarquin. Tarquin led them to Girard's family in Windy Canyon, where they discovered the almost defenseless pyramid. They ventured into the pyramid, and after some fighting with the Linear Guild, the Order discovers the Gate.

Roy resolves to destroy the Gate in order to get it out of the hands of the bad guys, but the divided Vaarsuvius attempts to stop him, believing that destroying the Gate will do more harm than good. However, this attempt is thwarted by the IFCC, and Roy destroys the Gate with the green flame power of his Greenhilt Sword, cracking it enough which destabilizes it, which destroys the pyramid in a large explosion.[4][5]

Peering into the rift, a entire ocean is visible with no fish. Laurin Shattersmith and Miron Shewdanker investigate it, and gets attacked by the Snarl.[6] 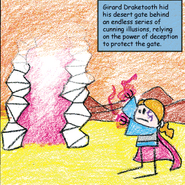 Add a photo to this gallery
Retrieved from "https://oots.fandom.com/wiki/Girard%27s_Gate?oldid=34056"
Community content is available under CC-BY-SA unless otherwise noted.