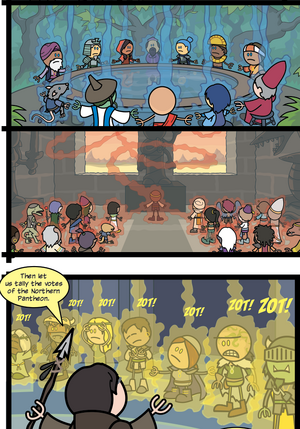 A Godsmoot is an important event described as being a meeting of "utmost secrecy and reverence", reserved for the High Priests of the assorted pantheons, usually held in secret[1] and in temporary, if often impressive buildings of some kind raised magically in a short time.[2].

The Godsmoot is a fairly formalized event, with designated places for the participants[3], and a considerable amount of rules, including a maximum of two bodyguards per participant.[4] According to Exarch Gontor Hammerfell, it is also a meeting of "utmost secrecy and reverence", reserved for the High Priest of each Northern God[3] (and, implicitly, to representatives of other Pantheons such as Veldrina).[3]

The Northern Godsmoot involved mainly clerics of the Northern Gods, among them the High Priests of Hoder[5] but also some Druids[4]. The Creed of the Stone, represented by its exarch Gontor Hammerfell, was chosen to manage it due to being a neutral party.[3]

The Northern Godsmoot began at noon of the Winter Solstice[4][1], was hosted at Zenith Peak in the Pinnacle Mountains and was administrated by the non-theistic religion of the Creed of the Stone. The Elven Favored Soul Veldrina was invited (with only a three days advance notice) to represent the combined Western and Elven Pantheons.[1] There was similarly a representative of the Southern Pantheon to relay the result of the Southern Godsmoot.

The moot was held in secret,[1] involved a vote of the Southern, Western and Northern Pantheons[6], and took pains to control any depictions of its proceedings.[4] There were approximately simultaneous votes of the Southern and Western/Elven Pantheons at their own Godsmoots.

The Moot swiftly devolved into combat after the High Priest of Hel, posing as the dwarven Cleric Durkon Thundershield, was attacked by his bodyguard, Roy Greenhilt of the Order of the Stick. The Nave was later invaded by the vampirized members of the Creed of the Stone, and the High Priest escaped after abdicating in favor of one of his subordinates, resulting in several of the High Priests to engage the invaders while others protected them. In short time, the vampires were defeated, though the former High Priest escaped with three of its minions.

Currently, Godsmoot is still in session, trapping every High Priest in Zenith Peak until the vote at Firmament can be resolved. Any bodyguards that escorted the High Priests inside are also trapped.

Retrieved from "https://oots.fandom.com/wiki/Godsmoot?oldid=39791"
Community content is available under CC-BY-SA unless otherwise noted.