Lord Hinjo is a Paladin of Azure City's Sapphire Guard[3] and the nephew and heir of Lord Shojo.[4][5][6] After Shojo's untimely death, Hinjo succeeded him as ruler of the Azurites and commander of the Sapphire Guard, becoming known as Lord Hinjo.[7][8] Lord Hinjo has continued to lead the Azurites in exile in their efforts to establish a new colony on an island near the Western Continent.

How the Paladin Got His ScarEdit

As a young man, Hinjo was working for the Diplomatic Corps of the city, where he learned rumors of the Sapphire Guard. Seeking information he infiltrated O-Chul's mission to discover who had provoked the Hobgoblins of the Southern Mountains under the assumed name Hin Jozuki. He was unsuccessful at diplomacy, but when he was uncovered by O-Chul, he was able to shed some light on the secretive organization of paladins and his cousin Miko Miyazaki.

No Cure for the Paladin BluesEdit

Hinjo first appeared when the Order of the Stick arrived at Azure City, helping Miko escort them to their trial. He is much more easy going than fellow paladin Miko Miyazaki, telling the Order jokes and generally getting on well with them. Miko's disapproval of this caused him to mock her to the Order, observing that her attitude was the reason she was generally sent on the long missions.[3] During the trial, it was revealed that Hinjo is the nephew of Lord Shojo and heir to the throne.

A few days after the Order returned from Cliffport, Hinjo and Miko were outside the throne room and overheard Roy and Shojo discussing their plan to investigate the other Gates, something forbidden to the Sapphire Guard. Hinjo initially sided with Miko in condemning his uncle, but failed to protect him when she decided to take his life.

With the death of Shojo and the fall of Miko, Hinjo became both the new lord of Azure City as well as the commander of the Sapphire Guard. He immediately set out to defend the city from the impending invasion of Xykon's army, the news of which had been brought by Miko.

Hinjo's rule was opposed by Azure City's noble class, most notably Daimyo Kubota, which tried several times to assassinate him in his short time on the throne.[9][10][1].

When Xykon arrived with his horde of hobgoblins, Lord Hinjo led the Azurite forces in the Battle of Azure City. Due to his duties to the city, he was not present in the throne room when Xykon faced the other members of the Sapphire Guard, and because of this he was among the four known paladins of the Guard to survive that day.

With the battle lost, Hinjo fled the city with Durkon, Vaarsuvius, and Elan aboard his royal junk.

Hinjo continued to lead the Azurites in exile, taking the fleet to visit several former allies seeking help in retaking the city or a place to start over. None of the former allies helped, due to their fear of Xykon.

For their actions during the battle, Hinjo elevated Kazumi Kato and Daigo Da- to noble status, creating House Kato.

Hinjo sent Elan on a diplomatic mission to Orc Island, which resulted in the capture of Lien, but ultimately led to good relations with the orcs who provided supplies to the fleet.

Diamyo Kubota made another attempt to take the throne (in exile) while the fleet was resting off what later be known as Therkla's Island. After Elan thwarted his initial attempts to have Hinjo assassinated by his ninja Therkla, Kubota attempted to lure Elan off to have her assassinate him instead. However, Therkla had fallen in love with Elan, and refused to kill him. At her planned tryst, Hinjo lead a group of Azurites along with Vaarsuvius and Durkon, hiding under an illusion until Therkla and the imp Qarr revealed their plans. Then they attempted to take the pair.

In an unlikely turn of events, Qarr was able to summon a gargantuan Pit Fiend, which did battle with Hinjo and his allies. Hinjo and Argent were able to do some damage to the devil, but ultimately it was Vaarsuvius and Durkon who dispatched the fiend, turning it to stone.

During the battle, Kubota also attempted to kill House Kato in order to solidify himself among the nobles. Therkla was killed in the struggle, and Vaarsuvius returned from the battle to dispatch Kubota, leaving Hinjo much more secure in his throne.

After Vaarsuvius returned from the Soul Splice and fight with Xykon, Hinjo was reunited with O-Chul the last of the four surviving paladins of the Sapphire Guard. Hinjo and the Azurites in exile were epic teleported to an island near the coast of the Western Continent, where an abandoned elven fort provided the ideal location for the Azurites to reestablish themselves.

Hinjo sent O-Chul and Lien to the North Pole to scout out Kraagor's Gate while the Order went to the Western Continent to prevent Xykon from reaching Girard's Gate. He himself stayed with his people to lead their settlement.

Blood Runs in the FamilyEdit

Hinjo and the Order of the Stick went their separate ways, but still remained in touch by way of Sending spells.[11][12][13]

When last seen, Hinjo had just learned of the fall of Azure City's resistance movement, the death of Ho Thanh, leaving only three paladins in the Sapphire Guard, and Xykon's leaving the city, which apparently gave him the motivation to stop his XP-earning activities and intervene in some way.[14][15]

Hinjo's current location and activities are unknown. He is aware of the status of the Order and his paladins at Kraagor's Gate.

Hinjo is a considerably more positive portrayal of a paladin than Miko Miyazaki, lacking her holier-than-thou attitude. As a paladin, however, like her, he does take his honor extremely seriously, refusing to break the oath he made, even if it might be a better long-term move. Knowing the tenuous nature of his position as ruler,[16] he is also very politically savvy, and is careful to always have on the right air and manner when others are watching him. Nevertheless he also attempts to project a firm stance against the nobles, and refuses to budge to their demands.[9] Also, Hinjo has shown a very Lawful preference that people follow the orders given, conceding that the ship captain who disobeyed orders and sailed away too early may have indeed saved his life, and that of everyone aboard, but still taking the moment to reinforce that he expects people to obey orders.[17]

As heir and subsequently leader of the Sapphire Guard, he has considerable knowledge of their lore; he knows about the Snarl and had foreknowledge of the Guard's ability to rise as ghosts when slain by Xykon in the throne room.[18]

Hinjo is particularly loyal and protective of his dire wolf mount, Argent.

Hinjo is a highly competent fighter, fighting with a single silver katana (he also possesses a cold iron katana)[19][20] shows great skill fighting from his dire wolf mount. His mount shows himself to be able to harm devils with its bite due to having silver teeth fillings from a trip to the dentist after Shojo once fed it 20 pounds of strawberry cake frosting.[19] Miko describes him as the "second most powerful paladin" in the Sapphire Guard, with her as the most powerful.[20] While her own arrogance almost certainly factors into this declaration, she is able to back it up. When they eventually fight he is beaten even though Miko had lost her Paladin powers, suggesting that she is a number of levels above him, although his initial reluctance to kill her may have given her something of an edge.[20] He is perhaps not quite up to the level of the Order of the Stick and was nearly killed by a single disintegrate spell from Redcloak.[21] 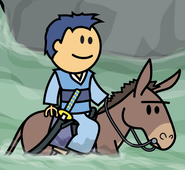 Retrieved from "https://oots.fandom.com/wiki/Hinjo?oldid=38669"
Community content is available under CC-BY-SA unless otherwise noted.