The Mechane is Julio Scoundrél's flying ship. It was introduced in the story to carry Elan and Thog to Azure City. Its home port is Cliffport.

Later, Julio used it to save the Order of the Stick at Elan's request from Tarquin. Feeling uncomfortable with having his apprentice around—since it was the perfect set-up for him to be killed by a villain leading to Elan avenging him—Julio chose to retire and left the ship to his first-mate, Bandana, telling her that her only orders were to take Elan wherever he asked.

The Mechane seems to have the oddity of increased speed when something is at stake, according to Julio Scoundrél.

The ship achieves lift through a combination of three lighter than air gas envelopes, magical lightening of the ship's structure, as well as two stern-mounted lift fans.[1] Gas for the envelopes is summoned from the Elemental Plane of Air.[2] The airship has an engine or engines that drives two pusher propellers on the transom, a third pusher prop under the stern, and two lift fans mounted on stern superstructures. Given the placement of the lift fans, they likely also control the pitch and roll attitude of the airship. Lacking any obvious rudder, yaw control is achieved by means of the pusher props. The airship is stabilized with dorsal and ventral vertical stabilizers on the gas envelope, and inverted V stabilizers mounted aft on the turn of the bilge.

For armament, it is fitted with six ballistae, three each port and starboard, mounted on through-hull turrets on the sides. The turrets can be ejected in an emergency to save weight.[1]

There are three decks topside: a main deck, forecastle, and quarterdeck, the airship is helmed from the latter deck, which also has two superstructures to support the lift fans. The arrangement of portholes suggests there are decks below the quarterdeck and forecastle, a second deck below the main deck, and a cargo hold below that. At least two staterooms for the passengers have been shown, as well as a cargo hold and a galley.

Since taking the Order of the Stick on board, the Mechane has traveled to Tinkertown, Zenith Peak, Passage Pass to Firmament, and on to the North Pole under Bandana's command.

There are at least twenty active crew on the Mechane, three deceased crew, three known former crew, and three crew whose current status is unknown. 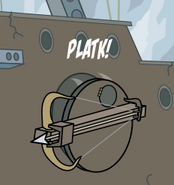 A turret being released off the Mechane in a pinch.

Retrieved from "https://oots.fandom.com/wiki/Mechane?oldid=39638"
Community content is available under CC-BY-SA unless otherwise noted.