She and Lancer fought the paladins O-Chul and Lien during their trek across the Gelid Glacier. (The paladins escaped under the ice using Lien's ring of water breathing, tricking Oona into thinking that they were dead.) Oona accompanied Team Evil on its forays into the myriad dungeons of Kraagor's Tomb. She is familiar with the tombs; the village subsists in part on resources gathered by raiding the tombs and then waiting for the monsters to respawn.

Oona is only a casual follower of the Dark One; she feels that Goblins and Hobgoblins get preferential treatment by their god, leaving Bugbears and other lesser known goblinoids with the "short end of the stick".

She is one of the few people to know the Monster in the Darkness's true species, having taken a peek under its umbrella when Team Evil arrived at her village. She calls the MitD a "magnificent monster". 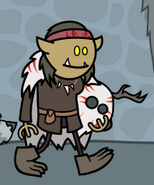 Retrieved from "https://oots.fandom.com/wiki/Oona?oldid=39672"
Community content is available under CC-BY-SA unless otherwise noted.